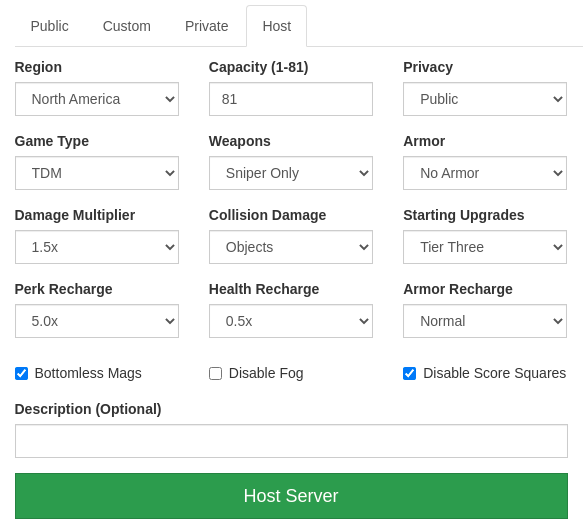 Q: Do I have to buy premium to keep playing Gats?

A: No, Premium will always be optional. All free features will remain free forever.

A: No, absolutely not. No pay-to-win mechanics will ever be added to Gats.


Some more updates are coming in the next week or two. Expect some changes to gas grenades and mines as well as a unique skin for lobby leaders.

Instead of having one score square for teams to fight over, there are now four. The score squares change to the color of the team that occupies them. Teams are automatically awarded three points per second for every square their team occupies. That means that if your team occupies all four squares, every single person on your team will be awarded 12 points per second. Squares will return to neutral if no team members are inside them. They'll also turn to netural if players from both teams are inside it.

This is the first of a series of updates for the new team gametype. On the selection screen, above the Play button, there are two new buttons which allow you to choose a gametype, 'FFA' or 'Team.' When playing the new team game type, you'll be automatically assigned to a team, either red or blue depending on which has fewer players. You'll only be able to attack players on the opposite team. The leaderboard has been color-coded to show players' teams.

A lot of players have messaged us asking about the name change. There are a number of reasons.

1) Battl.io is hard to pronounce, and upon hearing it people assume it’s spelled battle.io… this is a big problem. A large company has bought the domain battle.io and we are assuming they are developing their own game. There are also other iogames that have the term “battle” in their name. We want to distinguish ourselves from battle.io and other iogames that use the term battle.

2) Since launching the original beta version of the game it has changed immensely. A lot of people have said it feels like an entirely new game, and since the C++ build technically it is a completely new game. We think it deserves its own name.

3) There are a lot of google search problems with battlio, when searching for, 'battlio' you get a lot of results regarding army battalions etc, which from a technical perspective isn’t a great thing when you’re optimising yourself for search results.

4) We were never really happy with the name battl.io. When thinking of a name we had a few things we wanted to achieve: a) 4 letters or less b) easy to spell c) hard to mispronounce d) when you google it it’s the top results. Battl.io failed these criteria. That’s how we landed at gats.io (coupled with the fact that’s there’s not many 4 letter .io domains left available).

6) At first, we had considered leaving battl.io unchanged, instead, focussing all further development on gats.io. However, this would mean that battl.io players would miss out on all future content. We decided against this idea because we felt like we would be abandoning our loyal fans, so instead, we've decided to redirect all battl.io visits to gats.io.

We've tried to make the transition as seamless as possible for our fans. Your battl.io login information can be used to log into gats.io, and all your game stats will be kept. Stats will continue to update as normal on gats.io, and they can be viewed at stats.gats.io/stat/score

If you have any questions or concerns about this change, please post to the subreddit or email us.

We have some very exciting new powerups in the works, they should be out sometime this week.

If the community likes the new stats tables on the respawn screen, we might also update the home/selection screen too. Behind the scenes, we've increased the amount of player stats that we're tracking. This will help us significantly with balancing the current and future weapons and powerups.

We're pretty thrilled with the performance of the game on the new C++ servers and we have a lot of new and exciting updates in the pipeline! Also we're in the process of updating Battlio's thumbnail that appears on iogames websites. We've put out an open request to the community on the subreddit. If you have any designs or ideas, feel free to submit them.

Over the last couple of weeks, we've been implementing changes that should solve some of the "Enter Game" bugs, and other connection issues players have been facing. It's not perfect yet, we're still troubleshooting some issues specific to Internet Explorer.

We've been making terrific progress with the new C++ servers, it's coming together. Based on some recent load tests, it's looking like the new servers will be able to support up to 100 players at a time without slowing down. This will allow us to implement all kinds of exciting game modes.

To our loyal fans who keep checking the changelog every day, we just wanted to say thanks for sticking with us!

Currently, the battl.io servers are written in Nodejs which performs okay with a small number of players, however, it slows down substantially as more players join. We're in the process of re-writing the entire battl.io server in C++. We're making solid progress, but it's taking some time. We apologise for the lack of game-updates. We expect that with C++ servers, we will be able to support more players with less computational slow down.

All player accounts and game stats will be preserved when the C++ servers are deployed.

We're aware that a number of users are having connection issues where the 'Enter Game' button doesn't appear. If you're having this issue, please open the game in Google Chrome and send us a screenshot of the top error rows in your Chrome's console log. It can be accessed by pressing F12, then clicking on the 'console' tab and scrolling to the top of the console error log.

battl.io is now officially in beta! Over the last two weeks, players have played nearly 3000 hours, and helped us identify and fix many bugs. We appreciate all the help we've received! We still have a lot of work to do before a live production release, but here is what we've been working on over the last few days: